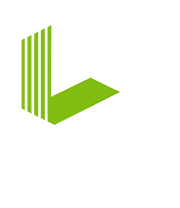 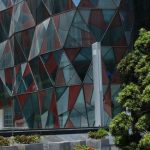 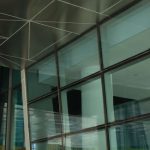 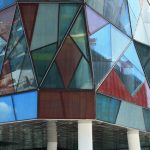 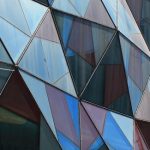 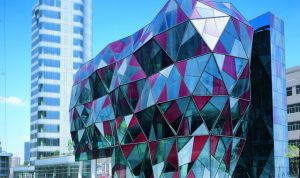 The area along the Huangpu River has been an urban development focus for a long time. Due to to the magnificent classical buildings lining the Bund promenade, Shanghai used to be called the “Pearl of the East”. With the Shanghai Port International Cruise Terminal, this architecture in a contemporary vein on the banks of the Huangpu river was continued. Concealed on the park-like grounds is a small but extraordinary building: the “Gallery Building” of SPARCH Architects with its three-dimensional glass façade.

The Shanghai Port International Cruise Terminal is not only a place where Shanghai residents can relax and hold events in the inner city, it is also a gateway for tourists from all over the world. Three 80,000-ton luxury cruise ships dock at its quay. Each year, more than 1.5 million passengers disembark here.

The 800-meter-long site is north of the Bund. On the other side of the river are the characteristic high-rises of the economic zone of Pudong. Within the framework of the large-scale Shanghai Port Development, approximately 260,000 m2 of space is being developed. In the invitation to tender, the sponsors established that 50 % of the area should be designed as publicly accessible park grounds. As a result, large parts of the space have to be housed underground.

The master plan for this part of the development area was won in 2004 by Alsop Design Ltd. Shanghai Studio. Subsequently, the Shanghai-based design team was commissioned to carry out the planning and implementation in a series of steps. In 2009, the Asian branches of Alsop Design Ltd. changed their name to SPARCH.

The design for this area of the Shanghai Port International Cruise Terminal envisages individual, sometimes free standing buildings, which form a unit due to their expressive architectural expression, carefully detailed glass façades, and impressive coloring.

Apart from the high class offi ce spaces stretching along the river the architects designed in the second row an events pavilion, a media garden, a restaurant pavilion, and the gallery building, called the “Peanut” due to its distinct shape.

The partially elevated building is very conspicuous due its extraordinarily shaped outer skin. Large triangular glass units, which consist of differentcolored panes, make the building look like a work of art; an exhibition piece. In the interior of the building, the offset story levels and the unusual façade structure create astonishing spatial impressions and views outside.

The unusual façade and the special construction of the complex roof structure was developed by RFR engineers. The Schüco special aluminium construction enabled large span widths with the greatest possible prefabrication and complete flexibility in the joints. This is the first such three-dimensional sculptural façade to be implemented in China.

The façade of the gallery building is a non-system-based special construction developed specifically for this project. The façade design is therefore one of a kind and a prototype. Thanks to this Schüco special construction, all of the demands could be met that were made in this complex geometrical building project: large vertical deformations of the ceilings and the steel substructure, horizontal placement of the ceilings under one another, earthquake security, and units that can open with different inclinations.